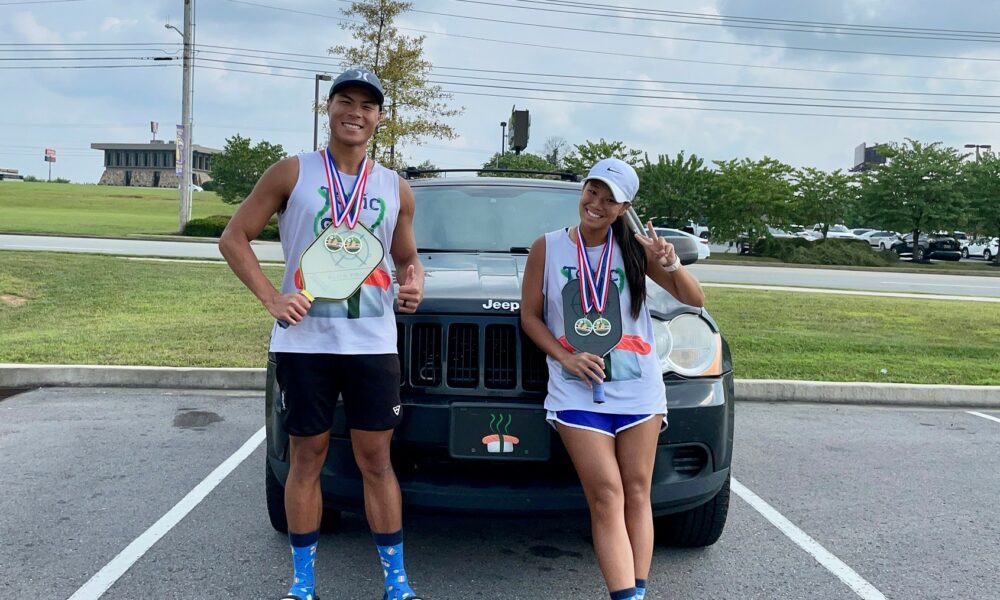 Today we’d like to introduce you to Kingsley & Emma Chiu.

Hi Kingsley & Emma, it’s an honor to have you on the platform. Thanks for taking the time to share your story with us – to start maybe you can share some of your backstories with our readers?
We’re Kingsley and Emma, we’re pickleball athlete based in Nashville, TN, we’re both 25. We’re being introduced to pickleball when we’re visiting a friend in LA 2 years ago. (*If you don’t know about pickleball, pickleball is the fastest growing sport in America. It’s a combination of tennis and ping pong.)

Both of us were pretty active throughout our whole life, we love to played all kind of sports. The thing that pickleball attract us so much is the community, from the west to the east, we’ve played pickleball in multiple cities, and everyone we met on the court are just super nice, and welcoming, we both agreed that none of the other sports have this kind of quality. Other than the dynamics of a pickleball game can be, the community is truly one of the major reasons that we love pickleball so much.

Kingsley is from Hong Kong.

Emma is from Bowling Green, KY.

We relocated to Nashville earlier this year.

Toxic Sushi might be one of the most random things that we’ve done together. We started Toxic Sushi because we’re entering a pickleball tournament in Hong Kong, and it’s required to have a team name. We’re thinking about something dumb and funny, and both of us like sushi, so why don’t we call ourself that in the tournament. However, Sushi alone sounds boring, so we decided to make it toxic, and that’s how Toxic Sushi were created. When we came up with the name Toxic Sushi, we didn’t mean to use that name for long except for that one tournament.

From there, we started making our jersey for the tournament, but unfortunately, the tournament was canceled due to the COVID situation in Hong Kong.

So, with the COVID situation, that left us a jersey that have never been wore.

Couple months later, September 2020, we played our very first pickleball tournament, APP Chicago Pickleball Open, where we decided to wear our Toxic Sushi jersey for the first time. Ever since then we always wear the jersey when we’re playing in a tournament together.

Fast forward 2 years later, with continuous training and getting advice from the pickleball community, we grow together in the sport. We played in 11 tournaments together. we’re lucky enough to get gold medal in 9 of them. In the future, we hope to complete in the highest level of pickleball.

I’m sure you wouldn’t say it’s been obstacle-free, but so far would you say the journey has been a fairly smooth road?
Tournaments has not always been easy, we started it as boyfriend-girlfriend, to we’re engaged, and now that we’re married. Unlike men’s doubles or women’s doubles, if we don’t communicate well, or play well together, we can just easily move on, and find someone else as our mans and women’s partner. When we’ve a relationship outside of the pickleball court, that makes it significantly harder.

In the beginning, we’re playing at a beginner level, nothing is really stressful. As the level gets higher, the game, the pressure, the environment became more intense, and that really put our relationship to a test. Since we both have a competitive personality, we take tournaments very seriously. We’re the kind of couple that never really fight about anything, but our biggest fight of our relationship is over pickleball in a tournament. Because of that fight, we’ve came to an agreement that we would always put one another before pickleball. Ever since then, we communicated so well on the court and our games together has only gotten better, probably because we realized that we’re not only partners on the court, and it’s something that both of us wanted to do together as a team.

Thanks for sharing that. So, maybe next you can tell us a bit more about your work?
Pickleball Athlete

We’re going to play in the Pickleball National Championship in California in December this year.

To be honest, I don’t know what set us apart, we’re just trying to be better players. We just love pickleball, passionate about it, and hope more people would get into pickleball.

Suggest a Story NashvilleVoyager is built on recommendations from the community; it’s how we uncover hidden gems, so if you or someone you know deserves recognition please let us know here.
Related Items